Since 2002, the Oceanarium has been involved with this campaign to do something about the terrible levels of litter around our coastline.

Since 2002, the Oceanarium has been involved with this campaign to do something about the terrible levels of litter around our coastline.

Beach litter is at the highest level since records began

Our 'throw-away' consumer culture means that a growing number of unwanted plastic items are discarded into our seas and onto our beaches every year, posing a threat to both ourselves and wildlife. A recent study by the United Nations Environment Programme (UNEP) estimated that there were 46,000 pieces of plastic litter per square mile.

Litter is swamping our oceans and is washing up on beaches. It kills wildlife, looks disgusting, is a hazard to our health and costs millions to clear up. There are nearly 2,000 items of rubbish for every kilometre on a beach. Marine wildlife gets entangled in litter and accidentally ingests it.

Turtles mistake plastic bags for jellyfish and the bags block their stomachs, often leading to death from starvation. Seabirds mistake floating plastic litter for food, and over 90% of fulmars found dead around the North Sea have plastic in their stomachs.

Plastic litter on beaches has increased 140% since 1994. Plastic never biodegrades. It just breaks down into small pieces but does not disappear. Microplastic particles are now found inside filter feeding animals and amongst sand grains on our beaches. MCS and International Coastal Clean Up surveys have shown year after year that plastics make up the majority of debris found on beaches, both in the UK and many other countries around the world. In the Southern hemisphere, half of all debris found on remote island beaches can be made of plastic.

Litter comes from many sources - the public, fishing activities, sewage pipes and shipping, but it is all preventable.

Organise Beachwatch events to clean the litter from 100 metres (100m) of a beach, record what is found and send the results to the MCS. The beach gets cleaned of unsightly and potentially dangerous rubbish and the results are combined with over 400 other national Beachwatch events. This provides some powerful evidence to influence government, industry and the public in tackling beach litter at source.

The Marine Conservation Society (MCS), the UK charity that cares for our seas, shores and wildlife. We work to secure a future for our living seas, and to save our threatened sea life before it is lost forever.

The Oceanarium has been organising and coordinating Beachwatch events since 2002 and has collected over 100 kilograms of rubbish from local beaches.

Thank you to all our volunteers that supported the cause and helped towards making a difference!! 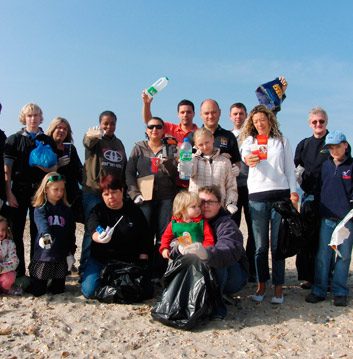