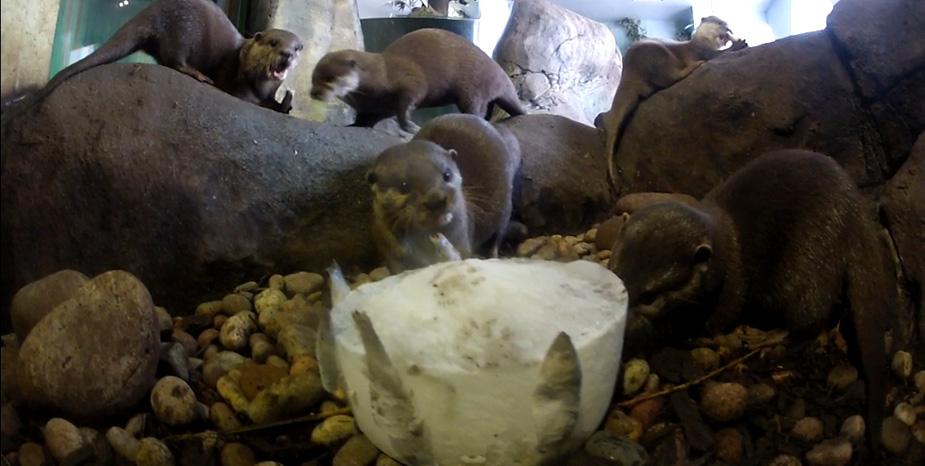 A special occasion has been marked here recently at the Oceanarium, Roxy the mum of our Oriental small clawed otter family celebrated her 3rd birthday!

Roxy was born on 23rd June 2010 at our sister attraction Blackpool Zoo, and photos of her as an otter pup even feature on our interp boards in Otter Oasis. Although we can’t guess which one she is. Can you?

Stan the dad of our otters also celebrated his 3rd birthday earlier this year. Born in March 2010 at Blue Planet Aquarium in Chester, Stan made national news due to his unusual appearance when he arrived. He was born with an unusual white coat of fur!

Although as he grew and developed his adult coat darkened to the usual colour expected of oriental small clawed otters we still think he is just as special!

Once both otters had almost reached maturity (which is normally 1 ½ – 2 years old) both where moved to us here at the Oceanarium in October 2011 with the hope that they would bond and become a mating pair. They got on better than imagined which you can read about here.

Just under one year after they were introduced the Oceanarium was delighted to discover the arrival of three adorable otter pups, born on Super Saturday during the Olympics 2012 they were aptly named Mo, Jess and Sophie, which you can read more about here.

Stan and Roxy although young themselves have proved to be such fantastic parents with the skills and abilities that the pups have displayed being testament to what they have taught them!

To celebrate Roxy’s birthday Ellie, one of our education team members, lovingly made them a ice cake out of some of their favourite things including; sprat (a little silver fish) and crayfish legs.

The ingredients were frozen into a cake shape to create a big ice block meaning that they could play with it on the land and in their pools whilst it slowly melted. What a fantastic way to cool down in the long awaited heat! Not only did they get to enjoy playing with it but it a great way to enhance their enrichment.

The otters loved it, and quickly got to work trying to break off bits of food. You can watch it all here on the video footage Ellie captured of them enjoying their cooling treat.

A special occasion has been marked here recently at the Oceanarium, Roxy the mum of our Oriental small clawed otter family celebrated her 3rd birthday!